“Lugh, I must speak with you—now!”  It was Danu calling to him. Her voice echoed strangely as if it were bouncing off tin walls. Sweat was pouring from his skin and he was running, though his feet were silent on the concrete floor.  The tunnel bent and changed direction after he’d gone a short distance. He felt it was closing in on him. His arm was outstretched holding Áine’s hand and she was leading him, running fast and pulling on him.

“No!  I am not going on without you! I need you!  Come on!” They heard a tremendous crash behind them and the walls drew nearer.

Something flew overhead less than an arm’s width from his face. He shielded his eyes. He could not see through the darkness and felt a thick pressure on his chest as the tunnel walls moved in closer.   “I cannot make it through, I am too big!”

Áine cried out to him, “NO! You’re not! I need you!” He tried to keep running but was trapped. There was a sudden blackness—as if all light, motion and sound had stopped abruptly. He could feel her hand in his, and then it was gone.

Lugh sat up in the bed, sweat pouring from his brow. “No, Áine, no.” he whispered, sickened by the loss of her, even if it was only a dream.

“Are you alright?” Maria turned in her sleep but did not open her eyes. 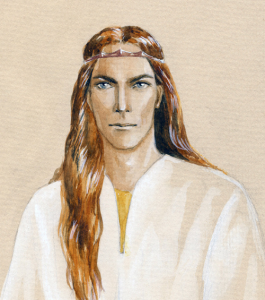 Lugh from Jankolas at deviant art.com

“Yes, yes, don’t worry…” Lugh looked down at his right hand and the ring was throbbing. He threw off his bedclothes and ran outdoors. He stood, staring at the ring. He was supposed to use the ring to call BéChuille; it was not supposed to call on him, so what did this mean? At last he decided to rub the ring and instantly BéChuille appeared, her nightclothes waving in a violent wind.

“I thought you didn’t want me to call you unless there was an emergency.”

“She has been having these terrible dreams, Lugh.  They are nightmares beyond what a young girl can bear, even a magical girl.”

“How come we didn’t know? Is she frightened? “

“Only a faery could hear her distress. She is frightened, but that’s not the point.  She is seeing. She is seeing something—something—Lugh, it is something not even I have seen before.”

He sat down. “I have been dreaming of her every night since before she was born.  But now the dreams are different. We are in danger if we go on.”

“You most certainly are.” BéChuille was steadfast. “I don’t see how you can fail to go on. There is no other way to go except on.”

Lugh bowed his head. “I know. Danu has been trying to communicate with me but I can’t understand her in my dreams. I have no way to reach her except through my dreams.”

“I see.” BéChuille sighed. “Well, she explained it in my dreams. She said the time is now and you must go. She has done all she can to prepare you for this moment.”

“I…I don’t know where to go or what will happen, or if Áine will be safe…”

“Nor do I, but you have no choice, you must let her lead you.”

“No. I will go without her. I cannot take her with me.  It is too dangerous.”

“Lugh!” BéChuille was firm. “She is the only one who knows where to go.”

Lugh knew that this was the moment his step-father Manannan had spoken of, that his child would show him the way. He knew this moment fulfilled the prophecy. Yet he could barely force himself to take another step. He went indoors, pulled the Sword of Light from its place on the mantle and lashed it onto his belt. He kissed Maria who smiled as she slept peacefully.

“Lugh, she won’t know that any time passed at all,” BéChuille whispered. And with that, they disappeared only to arrive in less than an instant at Áine’s bedside.

Áine was tossing and turning, sweat pouring from her forehead and drenching her curls. She reached out for her father’s hand, grasped it and would not let go.

She spoke with the voice of a grown woman. “Come with me.” At that moment all turned to white mist and they were gone.