The Fae released from their charm were: Nantosuetta, Nehalennia, Nematona and Airmid. The experience of having been wren for so long touched their lives in innumerable ways.  Mostly, they enjoyed being together and enjoying life’s pleasant view.


This morning they were lying in a meadow of wild clover that was growing so fast it nearly swallowed them in heart shaped dances of vivid green.

They laid in the meadow, looking up at the sky, drifting in and out of a heavenly sleep.

Nantosuetta, whose name means, “she who makes the valley bloom,” held the hand of Angus, the musician. Together their spirits drifted up and away from their bodies to a flight above the meadow. Angus played music, which was perhaps more beautiful than any he’d played on Earth.  And Nantosuetta danced, filled with the spirit of the forest.  Together their mutual admiration was so expansive, it infused all things, filling them with love.  And Nature, in turn, gave them breath, so they became the little glens and narrow valleys touched with tiny lavender flowers brushed with spots of colored light. They kissed the buttercups, because they were the wind. 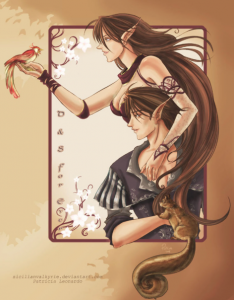 Nehalennia and Segomo also lifted up off the meadow floor, their spirits filled with joy and a mischievous sense of adventure.  They caught the warm breeze, lifting them high above the meadow to a second cooler breeze that took them higher and higher still, until they soared above the treetops and finally burst into the ocean’s sky. At that moment, they became the blue itself, sighing as the ocean tide, curling and whisking away, laughing with foamy breath.

Nematona and Eocho joined hands and their spirits playfully jumped into the meadow, infusing it with light. Their brightness shot up through the tree trunks, out to the leaves, budding new growth and flooding honey-tasting sap through golden-colored veins. Branches grew, creating lovely canopies where birds, squirrels and tiny fawn nuzzled and cooed. Their arms and fingers entwined as leaves making windows to the sky that let in light. Their green cathedrals rose so high the birds sang joyous rhapsodies to celebrate their beauty.

Mider and Airmid rose, took hands and set off on their fresh search for herbs and plants divined for health and healing. Each one they touched was empowered with life force and potency. Each one was carefully recorded and catalogued with methods of lovingly restoring life to any beast or being.  But more often than not, Mider and Airmid’s spirits became the loving vines themselves, twirling and twisting around each other in an embrace. 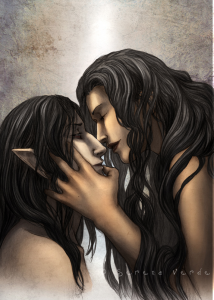 Love me Not by Serena Verde

As a cold-nosed and spotted white-tailed doe, lovely Flidais nuzzled Fionn, until he too, rose from his human form to join in Nature’s perfection, as a hart, her deer-lover.  Relishing in their temporary forms they shook their slender legs and tails and then began to frolic, feeling the strength of their bodies as they chased one another through the fallen leaves and across a moss-covered floor.  They admired perfection in every part of the forest: the new fern blossoms that unfolded in the morning dew, the low sweet call of the owl, the switch of the fat squirrel’s tail.  Through the admiration and appreciation of Fionn and Flidais, the forest and the animals became even more beautiful.

Scota and Dermot rose as butterflies, giggling and teasing without a care in the world. Scota’s command of her skills and self-certainty melted Dermot’s arrogance like sun upon the wintry frost, and their playful appearance made everything in their presence something to smile about, as if they’d thrown the world on its side and begun tickling its belly.  They spoke to the insects, the worms, and the undersides of the flowers as they bloomed, and even the seeds which were just waiting to sprout, letting them know of their good fortune just above the surface.

BéChuille fell in love with Ogme, who did nothing particular to win her over, except continue to smile at her stubbornness, until at last, their trust made them inseparable friends.  As they rose, she became the sky and Ogme became the singing birds, explaining to her in great detail, just how wonderful it felt to be within her sight.

The Elven and the Fae left no part of the forest untouched.

And in this way, each day was filled with loveliness and romance. Until one morning, when the sun rose over the corners of the earth while the stars still lit the sky….