Legend of the Tuatha dé Danann

Children of the Earth goddess

Whose voices echo from ages past

Are you buried under heavy mounds

of grass and stone?

Do you live among us today?

How may we know you?

How may we learn your magic?

Tuatha dé Danann in Gaelic means “tribe or children of the Goddess Danu.” Danu is the Earth or Earth Goddess.

Over the millennia, the beings of this race have been called gods and goddesses, Elven and Fae.

It is known that their civilization flourished on Earth thousands of years ago. Yet there is little written or archeological history with details about their lives.

Despite this, their belief system is so strong it calls to us through the ages from our ancestors––with the belief that the Earth is sacred and the source of our magical power. They guide us to find our harmonious place in the ecological system of the planet. Their voices bespeak our connection to our higher selves. They are teaching us to develop our magical skills as spirits of Nature.

The story of how the Tuatha dé Dannan arrived to Ireland and their many exploits have been pieced together from archeological accounts and Irish legends and you can read and learn this history.

The Elven have sparked interest of visionaries, writers, researchers and archeologists for centuries. It has been said they traveled from Greece or that they came from the lost continent of Lemur and Irish legend tells they mysteriously appeared in a cloud of mist.

We may never know for certain. But the pieces of the mysterious puzzle are, each one, a fascinating treasure. The discoveries of Tara Hill are a wonderful place to begin.

Tara Hill in Ireland was the home of the Elven Kingdom on Earth and is the legendary door to the Otherworld of Tír na nÓg that lies in another dimension. Artifacts more than 5,000 years old have been found there, including castle doorways and bronze implements. 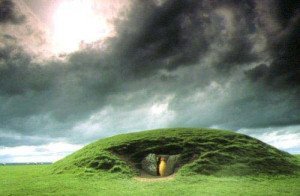 Hill of Tara. Ireland, at dawn

The complexity of the bronze items found, points to a very advanced civilization. Some archeologists believe that this civilization had its origin in Atlantis, a continent that may have existed between what is today Africa and America, that long ago sank into the sea.

The mound at Hill of Tara has been called “mound of hostages” and, like other ancient sites grown over with me down through the mellenium they are called “Faery mounds” passages of the Sidhe (pronounced shed), the faery portal to the Otherworld.

Atlantis and the Bronze Kingdoms

The accounts of Atlantis by the great Greek philosopher Plato have led many scholars and archeologists to pursue the mystery of the lost continent of Atlantis. A highly advanced civilization that began more than ten thousand years ago, Atlantis was deluged in what appears to have been a series of floods that ultimately, drown it completely in the Atlantic ocean.

No one has confirmed any findings of the continent’s remains though many have searched.

Archeologists have found mines in North America thousands of years old that used very advanced methods of mining copper. It has been surmised that the Atlanteans created these mines. They may have established the wealth and power of their civilization by producing bronze (made from tin and copper.) As exceptional sailors, they would have been able to travel the world introducing bronze as a tool for weaponry and machines.

As with the Tuatha dé Dannan, very little is known of these ancient people. It has been surmised that a series of three major floods threatened to wipe out the Atlantean civilization. Each flood saw the exodus of scholars and engineers of extraordinary capabilities.

It is thought that some of these people sailed to Egypt. And some sailed all the way to Ireland to start a new life on that beautiful Emerald Isle.

Until the remaining texts are translated, until more artifacts are discovered, we may never have actual evidence. Even then, we are only piecing together a story based on the facts we will have learned.

This is where Irish legend begins. Stories that were once passed down verbally from family to family have since been written down.

The legend tells us that as the floodwaters subsided, the Tuatha dé Danann ships stood upon the Hill of Tara in Ireland, whereupon they built their magnificent city of wood, ivory and bronze.

The story opens to us a picture of what might have been their way of life on the island; gardens with flowers of every color, birds who kept them company, bees that made delectable honey and cows who produced the sweetest milk. It has been said that the Tuatha groomed immense horses and rode across the countryside with their long hair flowing behind them. Tall and handsome, these magnificent people wore gold around their necks and crowns of flowers upon their heads.

It is up to you to decide what you believe.

Research indicates the Tuatha dé Dannan regained and practiced their skills in the seven cosmic laws—at least for a while. Some say the most advanced practitioners had developed the ability to appear and disappear at will and to transport through time and space. The most highly skilled could embody animal forms. During the evenings and into the night, they would leave their bodies in astral flight. Needless to say, they were also precisely skilled in the fine arts such as poetry and music, carpentry and metalworking.

Remember that legends are accounts without evidence, however true they may be. Legends tell us that other, more warlike races sought to conquer the Tuatha dé Danann and keep the island for themselves. First, were the Fir Blog, a shorter, stocky race. The Tuatha eventually made peace with them by giving them a wide area of land they could call their own.

The Fomorian giants followed. Fomorian are known as a supernatural race of beings with reddish skin and long thin hair with tempers so volatile it is as if they breathe fire.

Though the Tuatha dé Danann was reluctant, the Fomorian insisted upon war for many years, causing continual unrest in the kingdom.

About 4,000 years ago, during a time of relative peace between the Fomorian and the Tuatha dé Dannan, members of the human race invaded the island. Many say they came from Spain and called themselves Milesian.

Though we’ve never known why, the Tuatha dé Danann never went to battle with the Milesian. Instead, all in one day, they left Tara Hill in Ireland. It is said that they retired to a magical kingdom in a new dimension: a world created under the mounds of Tara and deep under the sea. The stories tell us the name for this world: Tír na nÓg, or the “Land of Youth” since within this world, it is said, the Tuatha lived lifetimes lasting eons.

We may never know the truth of this Tuatha dé Danann. Tara Hill is considered one of the most endangered ancestral or cultural sites in the world at the time of this writing, since new construction is moving onto this land.

Folklore is full of stories of magical people would travel from Tír na nÓg to the world of the humans. Their tricks, adventures and love stories were told for hundreds of years as myths of gods and goddesses. Over time, the stories became lore of great warriors with supernatural powers. As millennia passed, legends of beings with supernatural abilities began to fade altogether. The concept of true magic in the human culture was lost.

Today, we hear of the Faery and the Elven people as tiny beings who hide in the forests and can only be seen by those who are sensitive enough to observe their multi-dimensional state. Thousands of accounts exist of people seeing the Elven and Fae in their yards, farms and homes as well as in their mind’s eye. Many, to this day, believe the Elven heal them, grow their plants and enhance their lives. Perhaps the Elven Spirit––the Spirit of Nature––is the purest essence of our selves.

It is here that our story begins: The Return of the Tuatha dé Danann.

It’s up to you to learn more about these tales and discover their truth for yourself, if you will.

Most importantly it is up to you to live the legend from this point forward.